Welcome to SOA’s gallery of past Archives Month posters! SOA has celebrated Archives Month/Week since 1993 and printed its first poster in 1994 (changing from week to the month-long observance in 2007). Also view our posters in Pinterest. Hometown Heroes:
How the People of Ohio Made a Difference in their Communities – 2018 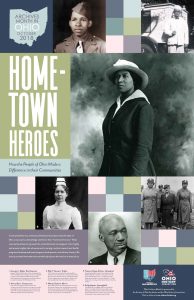 Both Local and Global: STEM Activity in Ohio – 2015 The theme of the 2009 poster was designed to complement the upcoming sesquicentennial of the Civil War and in honor of the 150th anniversary of John Brown’s raid on Harper’s Ferry (October 16, 1859). How did Ohioans participate in the abolition movement? Who were notable, and not-so-well-known abolitionists? What were some of the important people/places/events in Ohio? The full-size PDF version is also available. Reunions: Together in the Archives – 2007 Ohio Political Memory in the Archives – 2005

The 2005 poster was submitted by the Ohio Historical Society. The full-size PDF version is also available. The 2004 poster was designed by Jolyn Taylor of the Hudson Library & Historical Society which won the 2004 Ohio Archives Week poster contest. Th 2003 poster celebrates archival organizations throughout the state of Ohio. Not only is Ohio home to hundreds of high-quality archives, but the impact of these archives on the documentation and preservation of Ohio’s heritage is inestimable.

This year’s poster was was designed by Phil Reekers of the American Jewish Archives, which won the 2003 Ohio Archives Week poster contest. The full color poster measures 11″ x 17″.

Business and Labor in Archives – 2002

The 2002 poster graphic symbolizes the important bridges that archival organizations build between the world of work and the preservation of its legacy for future generations.

This image can be used as a heading banner for flyers or cut down to use as bookmarks. Output at 300dpi, the larger jpeg will fit comfortably within an 8 1/2″ wide area. Meant for color printers. The 2001 poster focuses upon the place the media have in our society. It shows photos related to the Cleveland Press Collection (with some 500,000 images and 1 million newspaper clippings) now housed with Special Collections in the Cleveland State University Library. The poster shows photos of routine newspaper operations, news photos of local broadcast programs, and in the background an image of the front page that reported the catastrophic crash of the Hindenburg zeppelin in New Jersey in 1937. The Cleveland Press (1878-1982), part of the Scripps Howard chain, was Ohio’s largest newspaper for many years of the 20th century.

The poster measures approximately 17″ by 22″ (or 43 by 56 cm.). It is printed in black-and-green ink on white paper. It was produced by the archival and graphic design staffs of the Cleveland State University and printed by the Orange Blossom Press of Cleveland.

SOA appreciates the contributions of its partners with this year’s poster, particularly the Ohio Newspaper Association, along with the Ohio Library Council and the Orange Blossom Press. The 2000 poster focuses upon the place museums have in our society. It shows the beautiful architectural style of the Toledo Museum of Art along with photographs of its patrons, especially youngsters, over the years. It also notes, through the membership card signed by industrialist E.D. Libbey, the important local context of the glass industry in the museum’s history. The Toledo Museum of Art will proudly observe its centennial in 2001.

The poster measures 17″ by 22″ (43 by 56 cm.). It is printed in black ink on white paper with a light green accent color. It was produced by the archival and graphic design staff of the Toledo Museum of Art and printed by the Homewood Press of Toledo. The 1999 poster focuses upon education in Ohio with a particular emphasis on William Holmes McGuffey (1800-1873). Known for his famed Eclectic Readers of the 19th century and a strong advocate of public school systems, McGuffey also served as professor at Miami University and president of Cincinnati College and Ohio University. With a mid-20th century classroom scene inset, the poster has a photograph of McGuffey and uses one of his readers as a backdrop.

The poster measures 17″ by 22″ (43 by 56 cm.) and is a red and black color duotone print. It was produced by the staff in the Rare Books & Archives Department, University Libraries, and the graphics department at the University of Cincinnati.

SOA appreciates contributions of its partners, the Ohio Education Association, the Ohio Council for the Social Studies, the Ohio Library Council, and the Academic Library Association of Ohio.

The 1998 poster focuses upon women’s history with a full length photographic portrait of a silent screen actress along with a series of inset photographs of women in many, varied roles, from visiting nurses and policewomen to factory workers and students, all from the holdings of the Special Collections and Archives department in the Paul Laurence Dunbar Library at Wright State University.

The poster measures 15″ by 34″ (38 by 86 cm.) and is a red and black color duotone print. The poster was produced by the staff in the Special Collections and Archives department and the University’s graphics department.

SOA appreciates the contributions in support of the poster including the Ohio Women’s Policy and Research Commission, the Ohio National Organization for Women, the Ohio American Association of University Women, Delta Kappa Gamma – Alpha Delta State and the Ohio Library Council. The paper for the poster was donated by Fraser Papers. The 1997 poster focuses on buildings for and functions of local government in the City of Cleveland and Cuyahoga County. It suggests the many and varied services of government including health care, transportation, recreation and libraries.

SOA and its co-sponsors, the County Commissioners Association of Ohio, the Ohio Municipal League and the Ohio Library Council, encouraged Ohioans to learn about units of local government in their community October 19-25 and to preserve and protect their valuable records.

The poster measures 17″ by 19″. Its mixture of black and brown colors suggests the sepia tone sometimes used in older photographic prints. It was produced by staff in the Office of the Clerk of Cleveland City Council.

SOA appreciates contributions in support of the poster. These have come from the County Commissioners Association of Ohio, the Ohio Library Council, the Ohio Council of Ohio Officials, the Ohio [County] Recorders Association, the Buckeye State Sheriffs’ Association, and the city of Cleveland. The 1996 poster focused on materials from the collections of the library of the Western Reserve Historical Society in Cleveland. It showed documents with family information along with library reference publications, and featured a computer, a new tool tremendously helpful to genealogical researchers. The Western Reserve Historical Society has an excellent collection of materials available for genealogical research.

The poster is a full color print measuring 19″ by 25″. It is produced from a specially made photograph created by the society’s curatorial and graphics staff and printed on coated stock. The paper for the poster has been donated by the Mead Paper Company.

SOA, along with the Ohio Genealogical Society (OGS) and its many chapters encouraged Ohioans to learn about their families October 20-26 and to take steps to preserve and protect valuable documents.

1995 was the 50th anniversary of the conclusion of World War II. SOA encouraged veterans and families of veterans to consider placing personal documents — letters, photographs, other textual items – into an archival repository.

The poster is a duotone print measuring 18″ by 24″ in size. It is produced from digitized files and printed on coated stock. It is foldered in the pattern of the V-Mail letters of World War II. O.U. graphic design student Abby Burnworth designed the poster with the assistance of the Instructional Media & Technology Services department, Ohio University Libraries.

Sports and Recreation in the Archives – 1994

This was the first in the series of Archives Week posters. Jobe Morrison, Vice President and General Manager of Cross Pointe Paper’s Miami Mill in West Carrollton, Ohio, generously donated the paper for the poster.

Thrilled to see my essay about @OSULibrary's suffrage scrapbooks in the excellent new issue of @ohioarchivists's Ohio Archivist. You can see the full newsletter at: https://ohioarchivists.org/wp-content/uploads/2020/09/ohio-archivist-2020-fall.pdf

It’s National Voter Registration Day! Photo shows young civil rights volunteers at Western College for Women in Oxford, OH in June 1964. They were there for a training program, learning nonviolent tactics for their goal of registering more African American voters in the South.